After publishing our successful fraud report at the end of last year, we share the fraud trends we've observed in our three major industries - Crypto, Fintech, and Mobility - in Q1 of 2021.

Last December, we published our Veriff Fraud Report, which looked at the rates of online identity fraud which we’d observed throughout 2020. This focused on the three major industries we’re currently supporting - fintech, crypto, and mobility. We also categorised the identity fraud we witnessed into four major types:

Not too surprisingly, there were spikes in online identity fraud in every industry, as more people started accessing services online. However the different industries saw peaks at different moments in the year. For Fintech, it happened early in 2020, around April and May, whereas Mobility saw a big increase very late, in November and December. For Crypto, fraud was pretty steady throughout the year, with around 8% of all verifications being fraudulent.

However, 2020 was a very different year for all businesses, so we wanted to see if any trends have continued into 2021, or if there are any more dramatic early-year peaks.

In Q1, our overall verification decline rate rose slightly, from 5.84% to 6.48%. Of these newly rejected identifications, the most common in the U.S. were driver's licenses (this was the same in the U.K.). The most common types of fraud were Identity and Recurring (35-48% and 46-58% respectively).

For the Crypto industry, we have seen an increase, not just in overall fraud rates, but also in dedicated fraud groups as fraudsters attempt to bypass our fraud prevention. As to the other sectors - fintech and mobility - with increasing verification volumes, we’ve also seen a steady rise in fraud levels, however, the ratios and fraud methods have remained the same.

The five most common countries for cryptocurrency fraud activity in Q1 were: Indonesia (11.5%) and the Philippines (7.9%), followed by Nigeria (6.2%), United States (5.1%), and the United Kingdom (4.9%). Recurring fraud reigned supreme, making up 62% of cases in January, with Identity being responsible for 32-44% of the quarter.

Countries with the most cryptocurrency-related fraud activity in Q1 2021

The five most common countries for Fintech-related fraud activity in Q1 were: Ukraine (by a landslide with 6.8%), followed by Spain (4.7%), Colombia (2.0%), and the UK and Germany (both with 1.7%). Identity fraud dominated this sector, taking up 47-62% of cases in the quarter, with recurring being responsible for only 26-45%. Compared to 2020, we’ve witnessed an increase in recurring fraud from 6% in 2020 to 26-45% in Q1 because several Fintech clients added extra fraud prevention features to better detect and catch fraudsters. 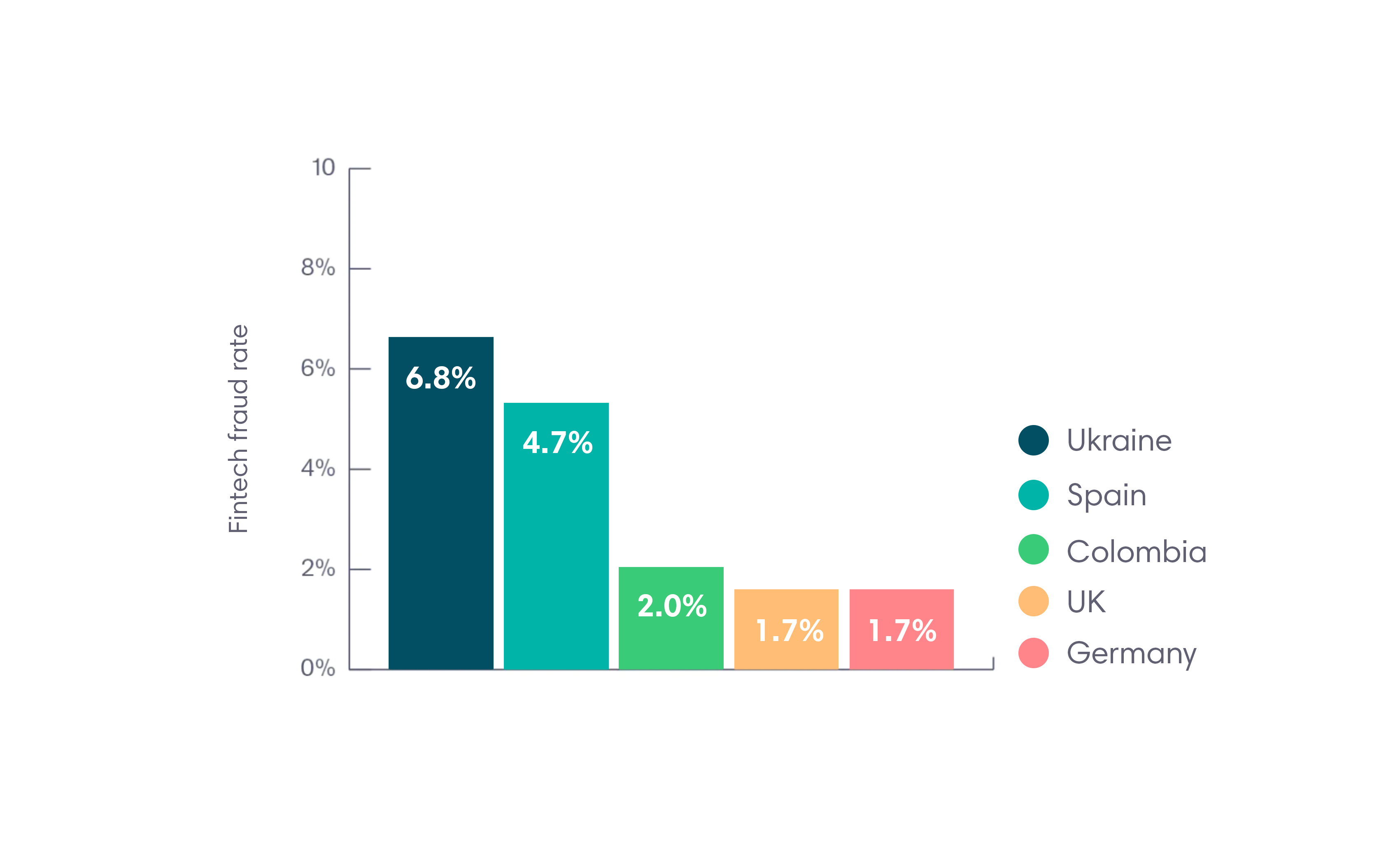 Countries with the most fintech-related fraud activity in Q1 2021

Mobility fraud was split almost down the middle between Recurring and Identity, each having nearly half of the declines. The United States had a 4.3% fraud decline rate, with the state of Georgia (1.4%) seeing a major bulk of that activity.

The amount of verification sessions in mobility is dependent on the season - lower in winter and at its highest in summer. However, the ratio of Identity fraud to Recurring fraud being the most common type of fraud has remained the same as in 2020 with almost an even breakdown between the two).